One of the most popular products that have been around for some time is Quest protein bars. I see them all the time in the grocery store, on YouTube, and just about anywhere you can purchase protein and fitness products.

They are supposedly supposed to be really tasty, although I have read on Amazon that some people who have been eating these protein bars by Quest for a while are disappointed by some ingredient changes that have been made to them.

Believe it or not, I have only tried a Quesst Bar once, and it wasn’t even a normal Quest Bar, but a Quest Hero bar. It was a while ago, but I remember loving it. So, I think I’ll start systematically tasting all the many varieties of these protein bars, and giving you some of my thoughts on them. The first bar that I will review is the Quest Hero Blueberry Cobbler Protein Bar. I love to eat almost anything with blueberry flavor, so this first tasting should be a good one I hope.

The ingredients list is not really that extensive, and they use a rare type of sugar called Allulose. Instead of me boring you with the details of trying to explain what Allulose is about, you can check out a great article on Allulose here. It is a pretty interesting read. Now on to the ingredients.

The Bluberry Cobbler bar doesn’t have the cleanest of ingredients, but I have seen much worse. Also, if you haven’t done so yet, check out the article that I linked to that I mentioned before about Allulose. It seems like a decent alternative to sugar.

There is some fiber in this protein bar, some potassium, and also is low in calories, even though it is a relatively thick bar.

When I first opened the wrapper around the bar, I noticed that it is covered in a white coating, and after taking the first bite, I really tasted a sweet, confectionery type flavor. If I think about it a bit deeper, it almost tastes like a sugary doughnut, though not with the same consistency. 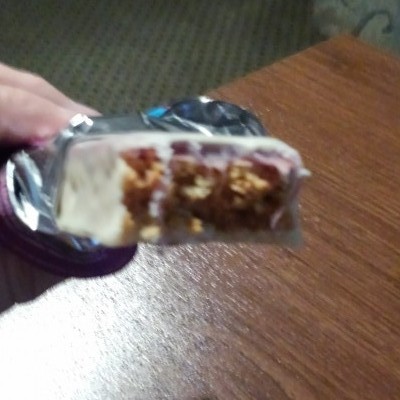 There is a thin layer of blueberry flavor on top of the bar just under the white sugary coating. It lies on top of what I would say is a crispy middle that reminds me on one hand of a rice crispy treat, and on the other hand a flavor and consistency of graham cracker. It doesn’t have that strong protein taste to it, it is rather sweet, but does have a bit of an odd flavor.

Maybe it’s the Allulose, I am not sure. It is not an unpleasant flavor, but it is different from I have tried before. After I was done the bar, there was a bit of an odd after-taste, but nothing that would keep me from eating this bar again.

The Quest Hero Bluberry Cobbler is a decent tasting bar. I did not love it, but it hit the spot in mid-afternoon when I am reviewing it. It is low in calories, so it is not a meal replacement bar, but it does have a decent amount of protein at 17g. I would suggest a try, it is tasty, and suffices as a nice snack between meals to cut hunger. Drink a beverage with it, as it ends up being a bit dry at the end of the bar. Not bad.

Robert Irvine's FITCRUNCH Cookies and Cream
This particular protein bar is my ultimate favorite....so far. It is delicious, satisfying, and provides 30 grams of protein per bar!